Everything You'd Expect from a Dark and Stormy Night

Almost immediately after the last (living) visitor exits the Merchant's House Museum, its staff observes a ritual the servants must have performed thousands of times-closing the windows and shutters and turning off the lights floor by floor.

When they hand the house over so we can begin our investigation, that's how we usually find the place: darkened, but hospitable - as if somebody's expecting company to arrive. At this point, the only illumination is coming from the two gas chandeliers in the parlors. It sounds like a cliché, but they really do cast flickering shadows on the imposing portrait of Seabury Tredwell in a way that gives the uneasy illusion his eyes are following you. Put some white sheets over the furniture, and the place would be a dead ringer for the Hollywood ideal of a haunted house. Classic.

Now cue the torrential rain punctuated by menacing claps of thunder followed by dramatic bursts of lightning. Then try not to flinch when you capture a crystal clear audio recording from a long-dead servant; and disembodied footsteps from the floor just above you. Now look at the Electromagnetic Field Meter as it moves more times in one night than most paranormal investigators see in a lifetime.

Our April 16 investigation was everything you could want from a dark and stormy night spent in a haunted house - as experienced by a veteran paranormal investigator, a calm acoustic expert, a protective Board member and a skeptical but jumpy reporter.

This is my fifth investigation; and by now, we're a tight little gang: Dan, Mike, Anthony and me. But tonight the really interesting stuff happened when, like that ominous turning point of every Scooby Doo episode, the gang separated to cover more ground.

Anthony had work to do that kept him in the third floor offices for most of the night; which left Dan, Mike and me to explore the house. After our first pass, Dan joined Anthony in the office to review the audio recording devices for EVP. And then there were two. Great. In the blink of an eye, we've gone from Scooby Doo to Ten Little Indians. Not that I'm complaining. A good mystery, and maybe a little scare to boot, was exactly what I signed up for. And what better place to find that than in a haunted house during a dark and stormy night. April 16's investigation was a soaker, with rain pounding on the windows from start to finish as well as appropriately dramatic thunder and lightning throughout the night.

This is one of those rare instances where Hollywood hokum and the paranormal party line are in step. Apparently, there really is something to the notion that during a drenching storm, the air is charged and that does a number on all of us who are made out of atoms and also somehow lifts the veil between the two worlds and makes it easier for someone to reach out and touch you, so to speak. 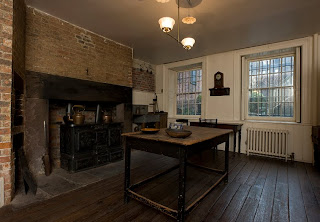 We found this out when Dan's hunch to start in the ground floor kitchen (as opposed to our usual top to bottom sweep) paid off with the most crystal clear clip of EVP I've ever heard. If you're familiar with those paranormal Reality TV shows that are clogging up the airwaves these days, you've likely heard what they say are the voices of the dead as captured by some sort of digital or analog recording device. Even with the audio cleaned up, most of these purported quotes from the grave come out muddied and generally indecipherable.

Most of the time (and I've done this a lot), my perception of the phrase doesn't come close to matching what the helpful subtitles are telling me I should be hearing. But this clip of ours - recorded just four minutes into the investigation - contains a man's low-pitched voice, clear as a bell and unmistakably saying the word "servant" in response to Dan's question as to whether there was anybody in the kitchen, and what their function was. Even Dan, who rarely gets worked up about these sort of things, said it was an exceptional piece of EVP.

Slightly less dramatic, but no less significant, were the two other EVPs we got that night. One was a recording of footsteps we heard while in the hallway near the kitchen. Dan said it was possible our sensitive mics were picking up Anthony walking around the office; but that's highly unlikely, since he was three full floors above us.

The third piece of EVP - of a stunning clarity along the lines of "servant," was recorded at 9:12pm in the fourth floor servants quarters. It came in response to a question posed by Mike, which followed up on previous indications from our psychic that a former resident of the quarters had a secret she wanted to share. "Soul should be saved" is what we all agree we heard-although whose soul (Hers? Mine? Yours?) is an ongoing mystery.

With the thunder and lightning showing no sign of letting up, we now go back to the Two Little Indians. It's 11:15pm. Anthony is still hunkered down in the office, and Dan joins him to review the EVP tapes (where he'll soon discover the EVPs I've just described). It's just Mike and me, and we decide to make another pass at the servants quarters (back in April, the two of us had what seemed like a long give-and-take session with two former occupants of the room: Irish servant girls). This time, with no Cathy to serve as interpreter, we had only our EMF meter - which we placed near one of the beds. Now keep in mind that Dan had his EMF meter for almost two years and took it on numerous investigations without the slightest movement of the needle in response to endless questions. Until he took it to Merchant's House. Maybe it was a lucky meter now, I don't know - but from 11:15pm to 11:42, our attempt to establish contact with the chatty Irish girls of April (or anybody else) netted dozens of responses via the EMF meter; so many that I actually lost count. What they said, and who we believe said it...well, this blog entry has already gone long, so tune in again and all will be revealed.